The launch date for Windows 8 is here (target date is  October 26).

If you haven’t been following the previews you might be surprised by this release. And that “surprise” is the topic of this post. In the past, new OS releases, both desktop and mobile have often drew “oooos” and “ahhhs” due to the eye catching icons, beautiful backdrops and artful styling.

Well get ready for a change … Welcome to Metro.

Windows 8 is Microsoft’s latest OS and is built not only for the desktop but also to seamlessly flow to mobile devices. To that end the new interface (called Metro) was created and is what you’ll see when  booting up any PC running Windows 8.

Metro Live and in Person

Wow … Now that is different … and I’m still on the fence.
With no offense to kindergarten classes, my first impression was, “hummm, this looks like something I drew in kindergarten”.
Big monochromatic squares … Flat letter and icons, no depth, no transparency … quite a change from The artful, multi-depth Aero interface of Windows 7.
I can see how this would work well on smartphones and tablets with limited display space (however the iPad and iPhone and Android devices certainly seem to do well with more sophisticated looking interfaces).

However, dig a little deeper, e.g. launch the application interface, and you’ll find a much more elegant interface … more like I was expecting from the new OS.

Perhaps Microsoft has discovered a great new interface that will greatly improve use, and it will just take some time to grow on me. Of course I’m still trying to find out where everything disappeared to in the latest version of MS Office … ribbons, ribbons everywhere! Thank goodness the shortcut keys are still the same (:->).

Be Your Own Judge

Below is a good review on YouTube by Logic Lounge on Windows 8 and the Metro interface. See what you think about the new metro interface.  Maybe it will grow on me … only time will tell!

International Digital Strategist, with a love of technology and people ... and bridging the gap between the two. 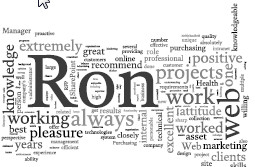